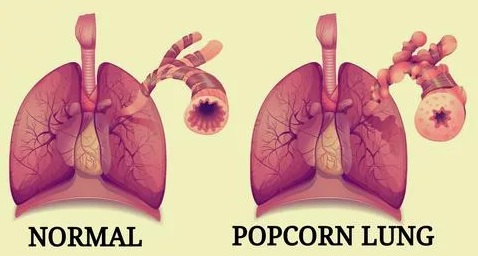 One of the latest discoveries that have gained a lot of popularity lately has been E-cigarettes. In fact, people have started promoting them as a safer way of smoking compared to normal cigarettes. However, this is not as it sounds.

Actually, the Harvard School of Public Health decided to do a study on E-cigarettes. What they discovered is the total opposite of what has been presented. In fact, E-cigarettes do not pose the traditional threat when it comes to smoking, but something very different.

The Truth About E-Cigarettes

Diacetyl is a flavoring chemical that has been used in E-cigarettes. This one is has been connected to cases of severe respiratory diseases, especially the one called Popcorn Lung.  This condition has been detected first in workers in microwave popcorn processing facilities that inhaled the artificial butter flavoring. This disease is in fact very debilitating and irreversible. It will cause scarring in tiny air sacs in the lungs. This might lead to shortness of breath and excessive coughing.

“The amount of diacetyl in 39 of the e-cigs exceeded the amount that was able to be detected by the laboratory. Diacetyl and other related flavoring chemicals are used in many other flavors beyond butter-flavored popcorn, including fruit flavors, alcohol flavors, and candy-flavored e-cigarettes.”

These findings are actually very scary. This is especially because there are different flavors of the cigarettes. There are some like cotton candy, cupcake or others, which are very attractive to young people.

However, we are not finished yet. We all know that these E-cigarettes are new. So, it will not be surprising if new risks appear with time. In fact, Elkan Blout Professor of Environmental Genetics claims the following:

So, it seems that after all, all of these so-called safe cigarettes that are an alternative to traditional smoking are not that healthy after all. Therefore, you should not even bother with this trend!